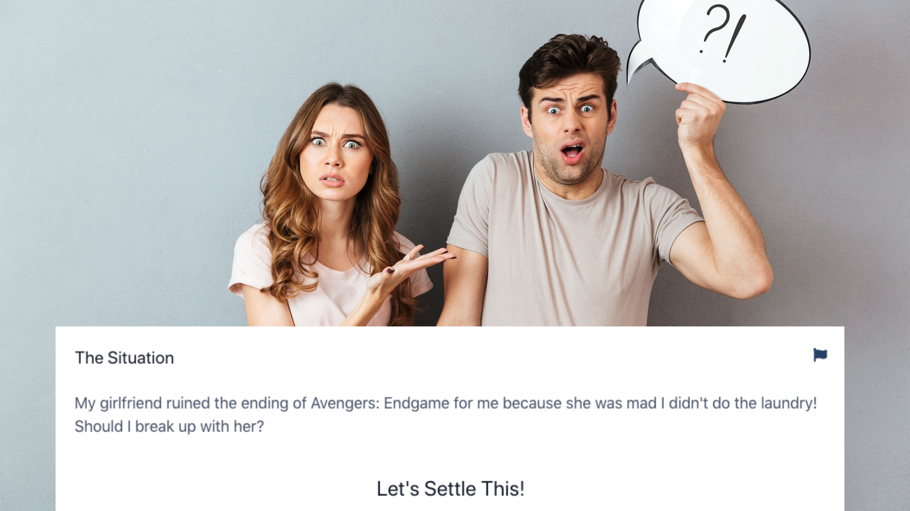 A new website is helping people squash their beef online.

Let’s Settle This effectively takes the fight out of your hands and into the digital streets of the internet. Fighting with your partner over what to watch on Netflix? Arguing with a friend over something shitty they did? Disagreeing with your spouse over the terms of your divorce? Just kidding. Well.

SEE ALSO: The Chicago Bulls’ logo is NSFW if you flip it upside down

Let’s Settle This plays host, judge, and jury to your argument on the online stage. The free site allows you to write a post describing your situation, where you can detail exactly what’s going on. Below, site users can vote for who they think is right. The site then calculates a percentage based on peoples’ votes, and boom! Argument solved. Right?

After voting, you’re presented with a new argument, which seems like it can easily lead to hours of playing jury.

Although, we guess it’s up to whoever you’re arguing with whether they want to concede or not. That, we’re afraid, is out of the internet’s hands.

While the site is new, heading to the internet to seek advice on your problems is not. Advice subreddits like r/AmItheAsshole and r/RelationshipAdvice have been steadily gaining popularity in recent years, but what sets Let’s Settle This apart is that it’s a dedicated place to solve arguments, instead of seeking advice. The site also allows readers to see both sides of the argument, instead of a single submission from a Redditor that may not be telling the whole truth.

You can give it a try by going to letssettlethis.com. Do you trust the web to decide who’s right?

A Socialist Plan to Fix the Internet

Believe It or Not: Your Internet Speed Has Actually Increased by 17 Percent This Year