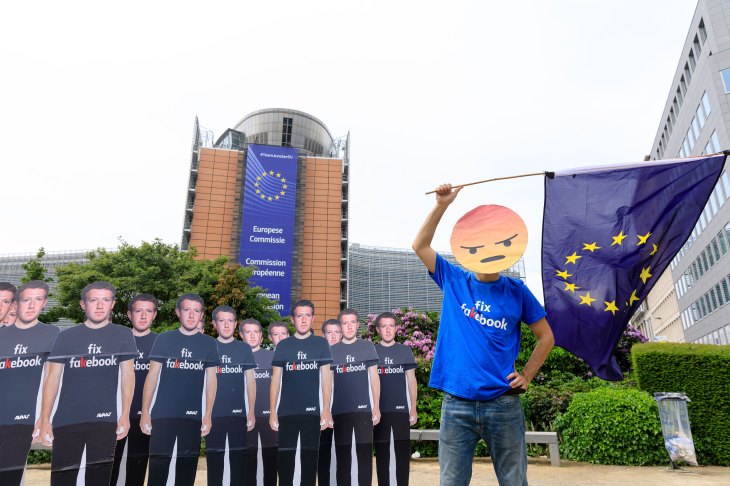 Facebook  founder Mark Zuckerberg  is in Europe this week — attending a security conference in Germany over the weekend, where he spoke about the kind of regulation he’d like applied to his platform, ahead of a slate of planned closed door meetings with digital heavyweights at the European Commission.

“I do think that there should be regulation on harmful content,” said Zuckerberg during a Q&A session at the Munich Security Conference, per Reuters, making a pitch for bespoke regulation.

He went on to suggest “there’s a question about which framework you use,” telling delegates: “Right now there are two frameworks that I think people have for existing industries — there’s like newspapers and existing media, and then there’s the telco-type model, which is ‘the data just flows through you,’ but you’re not going to hold a telco responsible if someone says something harmful on a phone line.”

“I actually think where we should be is somewhere in between,” he added, making his plea for internet platforms to be a special case.

At the conference he also said Facebook now employs 35,000 people to review content on its platform and implement security measures — including suspending around 1 million fake accounts per day, a stat he professed himself “proud” of.

The Facebook chief is due to meet with key commissioners covering the digital sphere this week, including competition chief and digital EVP Margrethe Vestager, internal market commissioner Thierry Breton and Věra Jourová, who is leading policymaking around online disinformation.

The timing of his trip is clearly linked to digital policymaking in Brussels — with the Commission due to set out its thinking around the regulation of artificial intelligence this week. (A leaked draft last month suggested policymakers are eyeing risk-based rules to wrap around AI.)

More widely, the Commission is wrestling with how to respond to a range of problematic online content — from terrorism to disinformation and election interference — which also puts Facebook’s 2 billion+ social media empire squarely in regulators’ sights.

The details of the DSA have yet to be publicly laid out, but any move to rethink platform liabilities could present a disruptive risk for a content-distributing giant such as Facebook.

Going into meetings with key commissioners Zuckerberg made his preference for being considered a “special” case clear — saying he wants his platform to be regulated not like the media businesses which his empire has financially disrupted; nor like a dumbpipe telco.

On the latter it’s clear — even to Facebook — that the days of Zuckerberg being able to trot out his erstwhile mantra that “we’re just a technology platform,” and wash his hands of tricky content stuff, are long gone.

Russia’s 2016 foray into digital campaigning in the U.S. elections and sundry content horrors/scandals before and since have put paid to that — from nation state-backed fake news campaigns to live-streamed suicides and mass murder.

Facebook has been forced to increase its investment in content moderation. Meanwhile, it announced a News section launch last year — saying it would hand-pick publishers’ content to show in a dedicated tab.

The “we’re just a platform” line hasn’t been working for years. And EU policymakers are preparing to do something about that.

With regulation looming, Facebook is now directing its lobbying energies into trying to shape a policymaking debate — calling for what it dubs “the ‘right’ regulation.”

Here the Facebook chief looks to be applying a similar playbook as Google’s CEO, Sundar Pichai — who recently tripped to Brussels to push for AI rules so dilute they’d act as a tech enabler.

In a blog post published today Facebook pulls its latest policy lever: putting out a white paper which poses a series of questions intended to frame the debate at a key moment of public discussion around digital policymaking.

Top of this list is a push to foreground focus on free speech, with Facebook questioning “how can content regulation best achieve the goal of reducing harmful speech while preserving free expression?” — before suggesting more of the same: (Free, to its business) user-generated policing of its platform.

Another suggestion it sets out which aligns with existing Facebook moves to steer regulation in a direction it’s comfortable with is for an appeals channel to be created for users to appeal content removal or non-removal. Which of course entirely aligns with a content decision review body Facebook is in the process of setting up — but which is not in fact independent of Facebook.

Facebook is also lobbying in the white paper to be able to throw platform levers to meet a threshold of “acceptable vileness” — i.e. it wants a proportion of law-violating content to be sanctioned by regulators — with the tech giant suggesting: “Companies could be incentivized to meet specific targets such as keeping the prevalence of violating content below some agreed threshold.”

It’s also pushing for the fuzziest and most dilute definition of “harmful content” possible. On this Facebook argues that existing (national) speech laws — such as, presumably, Germany’s Network Enforcement Act (aka the NetzDG law) which already covers online hate speech in that market — should not apply to Internet content platforms, as it claims moderating this type of content is “fundamentally different.”

“Governments should create rules to address this complexity — that recognize user preferences and the variation among internet services, can be enforced at scale, and allow for flexibility across language, trends and context,” it writes — lobbying for maximum possible leeway to be baked into the coming rules.

“The development of regulatory solutions should involve not just lawmakers, private companies and civil society, but also those who use online platforms,” Facebook’s VP of content policy, Monika Bickert, also writes in the blog.

“If designed well, new frameworks for regulating harmful content can contribute to the internet’s continued success by articulating clear ways for government, companies, and civil society to share responsibilities and work together. Designed poorly, these efforts risk unintended consequences that might make people less safe online, stifle expression and slow innovation,” she adds, ticking off more of the tech giant’s usual talking points at the point policymakers start discussing putting hard limits on its ad business.

Update: In remarks to journalists following Zuckerberg’s round of meetings, Politico reported Breton gave Facebook’s ideas a chilly reception — saying the company was offering too little “in terms of responsibility and regulation”. He also rejected the idea of a third status for regulating Internet platforms and pointed out Facebook had had nothing to say on “market power”.

“It’s not for us to adapt to those companies, but for them to adapt to us,” Breton added.

During the press briefing Zuckerberg is also reported to have suggested it’s “operationally unfeasible” for a platform of Facebook’s size to apply strict content rules — “given that there are more than 100 billion pieces of content a day, and that we’re not generally producing the content”.